“In the U.S, we’re so blessed to have great national and state parks,” Linda says. “Georgia alone has more than 1,000 trails and we want to be the place where people can go to find all of the information they need on every trail.”

Since starting their full-service destination marketing company in the mid-1980s, the Moselys have remained dedicated to the outdoors in both their personal and professional lives.

Get to know DGO’s Founders 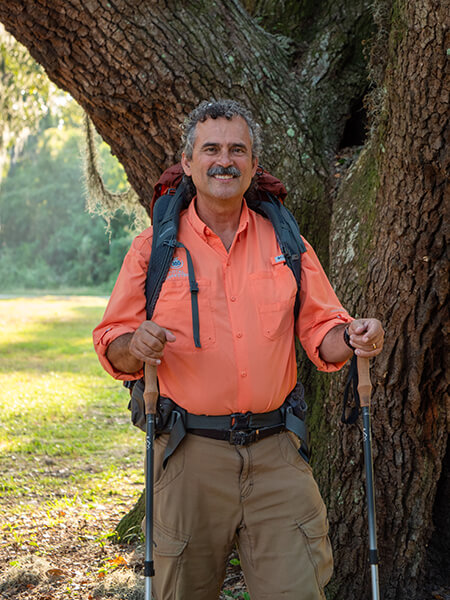 Mark Mosely grew up on Wilmington Island, Georgia, a barrier island east of Savannah that had yet to be developed at the time of his youth. Mark’s days were filled with the joys of barefoot life on the coast - camping, casting and living off the land. As an adult, Mark’s excursionary interests only grew, taking on pursuits like climbing, whitewater kayaking and mountain biking, among others.

While studying at Mercer University, Mark was an Audubon Society Scholar, honing his skill in wildlife photography. Professionally, Mark has worked as a journalist for daily newspapers as well as National Geographic and Brown’s Guide to Georgia.

His family's deep roots in the Savannah area meant he always had a place to call home, even as his work took him all over the U.S. and ultimately the world.

“I’ve been to 69 countries, but I’ve realized I grew up in one of the most unique places on earth,” says Mark, who serves as the President and Executive Editor of 365 Degree Total Marketing on St. Simons Island. “From the Mountains to the Coast, Georgia has a little bit of everything.”

Linda Mosely developed a similar appreciation for the outdoors, growing up in the small North Georgia town of Jefferson. Thanks to her intrepid educator parents, Linda had visited 42 states by the time she graduated high school and was an avid camper, hiker and horseback rider.

Prior to becoming CEO of 365 Degree Total Marketing, Linda taught Psychology at Clayton State University. She has a Master’s Degree from Georgia State University along with several undergraduate degrees from Mercer University.

Linda continues to cherish the time she spends in nature. She’s completed more than 15 half-marathons, is an avid windsurfer and even chose to hike the Georgia portion of the Appalachian Trail for a recent milestone birthday.

She believes the mission of Discover Georgia Outdoors can change lives by promoting interaction with the natural environment and other outdoor enthusiasts.

“People are happier and healthier when they’re walking outdoors,” she says. “The more people we can get out there on the trails or on the water, the better off our society will be.”

Where Mother Nature Comes to Play…A New Adventure Every Day. There’s no better place to explore the great outdoors than in White County, Georgia. With over 20 area waterfalls, 7 wineries, 3 State Parks and Georgia’s Newest Historic Site, every day is an adventure.
Visit website